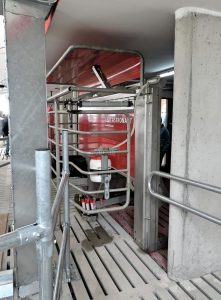 Globally, over 35,000 robotic milking systems are operating on farms. Installing milking robots is an excellent way to expand operations without the farmer having to hire additional staff. It also improves the quality of life for farmers by making work easier. Firms like Fullwood Packo offer innovative solutions.

Various factors are influencing RMS profitability. Some of them include; milk production per cow, milk produced by each robot daily, labour cost savings and the length of useful life.
The biggest disadvantage of using robots is the heavy investment needed.

Capital of $150,000- $200,000 is needed per robot that can milk between 50-70 cows. As per historical statistics, it is more costly to use milking robots than it is to use conventional milking techniques. However, these results may be turned around by improved management techniques, higher labour costs and improvement of robotic technology.

According to USDA (2016), the total wages paid to livestock workers increased from 3%-4% between 2014 and 2015. However, the reported RMS labour savings have shown variations. Some farmers indicate zero savings while the highest level of savings recorded is 29%. These differences may be explained by the barn design as well as the different management systems. Farm management records as per Finbin (2016) show that RMS farms in the Upper Midwest side produced 2.2 million lbs of milk per worker compared to the 1.5 million lbs produced by herds of the same size milked in parlours.

Another determining factor when it comes to the installation of milking robots is the availability of farmworkers. A survey done in 2014 showed that 51% of farmworkers were immigrants (Adcock et al., 2015). The availability of immigrant workers may change if strict immigration laws in the US are passed or if fewer workers are willing to work on farms.

Changes in Milk Production When Robots Are Used

For maximum profit, milk per robot must also be maximized. The net annual income for a four robot system increases by $4100 for every 500 lb of milk. This is using a 2% annual wage inflation for 20 years. In some US farms, over 6000 lb of milk per robot is being harvested daily. To achieve this, a combination of high milk levels per cow and the number of cows per robot is utilized. Below are the most crucial factors in achieving this: